Farming is at the root of development of civilizations, as it paved the way for humans to begin a settled life from nomad character and enabled them to think further on different aspects of life, and from here a new era of life was initiated with development of hamlet, villages and cities.

For a long time (may say for centuries) , there was no crisis of  food  and people were leading a happy life as the needs were also limited and farming was considered as most respectable occupation in the society with strong Social Fabric. But the development of a materialistic society, growing population, and never ending needs (or greed) have put the farm, farming and farming community under extreme pressure threatening life and livelihood on this beautiful planet which is the only known safe haven for humans in this universe.

Till the early 1980s, our rivers were so clean and clear that their water was being used for cooking. But today, even the ground water is contaminated and it is due to industrial waste and excessive use of pesticide and fertilizers being used in agriculture. Sulphur dioxide emissions were reported in 1979 to have nearly tripled in India since the early 1960s, making them only slightly less than the then-current emissions from the Federal Republic of Germany (http://www.geocities.com/narilily/acidrain.html). Water resources of India are under great biotic and abiotic pressure

With increase in migration (approx 40% in case of Bihar and UP), reduction in area available as pasture lands, and mechanization of agriculture, the number of cattle heads have also reduced resulting in a shortage of manure as can be used to enhance organic matter content in soils. This has adversely affected soil texture and thus, the quality of farm produce and productivity. So it is evident that farm, farming and farmer are the main sufferers and in need of attention and solutions.

It is the calamitous impact of unbridled greed-driven growth that many plants and animals species on earth are on the edge of extinction. I recall 3-4 birds (locally known as Maina, Kachbachia, Churmunni and Tota) which were seen in abundance in our locality are hardly seen now a days. Many of these birds are insect eaters and pollinators and hence, intricately linked to the farming system and thus, food security and human survival (apart from of course, their intrinsic value and right to exist). Thus, the adverse effects of the way we treat Nature also go beyond and boomerang back to farm, farming and farmers.

This is a call for each and everyone on this earth to save farm, farming and farming community. If we expect life on earth to continue, a lot more needs to be done by individuals, society, National governments and other institutions to save lives and livelihoods by intervening on all fronts, viz. restoration of soil, water and air quality to sustain farming, increase income of farmer through diversification of agricultural activities, infrastructure development, access to extension services,  fulfilling credit need which can sustain the farming family.

Otherwise, the day is not far when Human Civilization will remain as a page in history, never to be read any more by anyone in future. 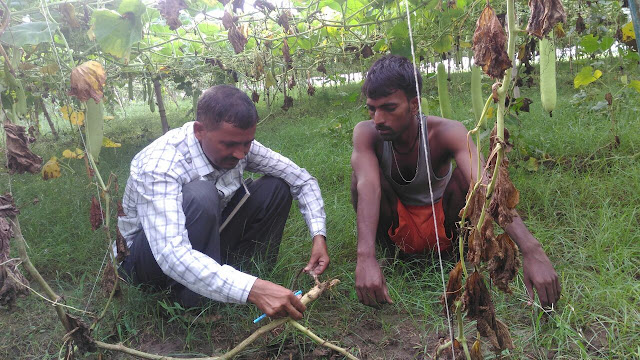